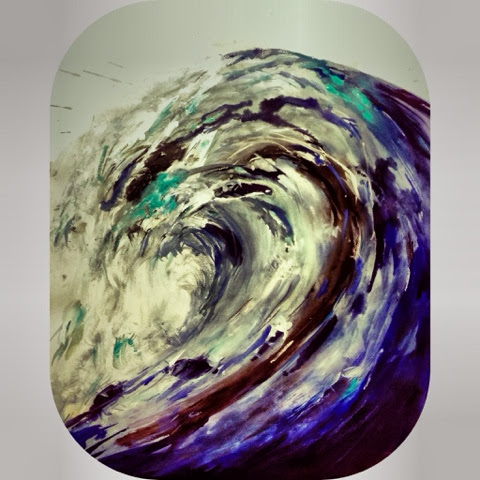 “What portion of the wave of God’s presence resonates w/ you most? Is it the building momentum, the evidence of it’s power in frothy glory or it’s subdued wash ashore resting from the sea?”

A hymn’s lyrics were sent to me by Kathie a local artist and friend, when she responded to the above question.
Oh the deep, deep love of Jesus, vast, unmeasured, boundless, free….Rolling like a might ocean, in it’s fullness over me.
Creation has a loud sound ringing out “God-Made” not man-made.
Hymns are composed and by men set forth to show the greatness of our God.
Nature as a master composer plays a symphony.  However, in it’s fullness like that of the sea it can not articulate God’s greatness.
Now come closer still and consider God in His fullness far more magnificent than all the ocean and massive waves.  This same God giving you and I voice in His kingdom.  A chance to be propelled by His might.
You and I are God-made.  God sustained.  God begotten. God willed in this life.
Lord, your kingdom was set up long ago; you are everlasting. Lord, the seas raise, the seas raise their voice. The seas raise up their pounding waves. The sound of the water is loud; the ocean waves are powerful, but the Lord above is much greater. (Psalms 93:2-4 NCV)

Evan from City Wide Worship wrote his response: I thought of well before it breaks on the shore. When the wave is moving, powerfully and in ways you don’t even know about. Then as it breaks you begin to realize how it comes full picture.

That is often how it is with God, he is working even before we were bold enough to ask and far beyond what we can humanly see.

Bryan Halferty commented: I think of how it starts as a swell and builds, picking up momentum and power.

God’s waves are like that originated from the oceanic swell of His will.  Often starting with a man or woman surrendered to His plan – ending with a dynasty – like government of power and peace brought forward by His Son.
The hymn continued:
Underneath me, all around me, is the current of Thy love, …leading onward, leading homeward, to my glorious rest above!
Be Blessed
Charity