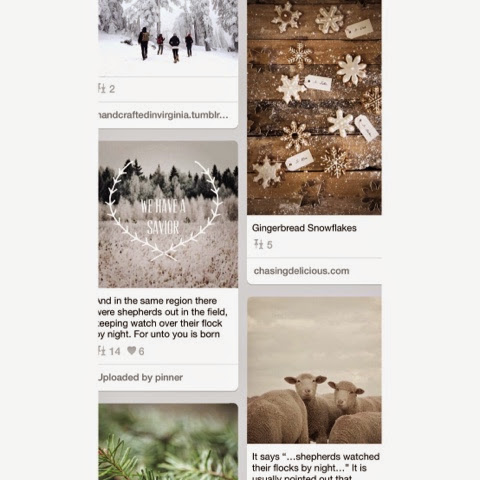 Set your intentions, the Christmas season is about to begin!  I have created a Pinterest board called “Kinfolk Christmas” gah yes I love that magazine!  I wanted to create something that has both the winter joy, and the good news of Christmas to help us deck the halls and ready our hearts and homes.

Christmas begins with Christ.  When Christ was born, every portion of the King’s birth was counter-culture (the culture of pride and the glory of man).  The Father of all faithful showed us his nature in the Messiah’s humble arrival.  The birth of the King of Israel, the Savior of men, came in the glory of God, to worn Shepherds, the God-fearing fiance Joseph, and the humbled handmaiden of the Lord- Mary. His son was also revealed to those who followed closely the signs in the heavens- a willing to travel band of wise astronomers in their day.
He was hidden from the palaces and pleasures of royal kings.  He was held and loved far away from the thirst for power found in highborn courts.  God’s way is revealed throughout the old world- the world before Christ was born.  Even in the days of Zechariah truths of God’s counter-culture character is recorded.
Zechariah 4:6 (English Standard Version)
Then he said to me, “This is the word of the LORD to Zerubbabel: Not by might, nor by power, but by my Spirit, says the LORD of hosts.
Definitions
might2
mīt/
noun
noun: might
pow·er
ˈpou(ə)r/
noun
noun: power; plural noun: powers

Christ was entrusted to a young couple, Joseph and Mary overcoming the doubt and wonder of a virgin birth.  He, Joseph in his doubts and her in the like, “how can this be”- together, they are pair willing to love  and give home to God’s own Son.
The babe Christ, grew in the same week by week passage of all humanity.  Weeks turned to months of waiting.  And after the wait, Shepherds.  The Father of the King of Kings opened the heavens to announce His Son.  Shepherds are not the political power play, an earthly king host’s would make proclamation too.  Choirs of angels singing, on a cold winter night in the fields not far off from Bethlehem, Shepherds entrusted to carry the message.  God’s way evidenced in this meek and mild announcement crowd.
Zechariah 4:7″(English Standard Version) Who are you, O great mountain? Before Zerubbabel you shall become a plain. And he shall bring forward the top stone amid shouts of ‘Grace, grace to it!’”
Christ is the fullness grace from God for all.  Christ brings our self-saving to an end.  Rest for the weary.  Hope for the downcast.  Love to all mankind.  Pardon to the sinner.  Freedom for the ones bound under the curse of sin and death.  A Savior who saves- not by might, nor by power, but by God’s Spirit.  He brings grace upon grace.
Romans 11:6 And if by grace, then is it no more of works: otherwise grace is-
Ephesians 1:6,7 To the praise of the glory of his grace, wherein he has made us accepted-
Ephesians 2:4-8 But God, who is rich in mercy, for his great love with which he loved us-
Consider the commentary excerpt below and know this day God is with you.  This Christmas it is a time to overcome your doubts and understand that just like Joseph and Mary God intends to be with you.
“Gill’s Exposition of the Entire Bible
The Lord of hosts is with us,…. The Targum is, “the Word of the Lord of hosts”. He whose name is Immanuel, which is, by interpretation, “God with us”, Matthew 1:23; who is King of kings, and Lord of lords; who has all creatures in heaven and earth at his command, whom all the hosts of angels obey; he is on the side of his people, and therefore they have nothing to fear from all the hosts and armies of men; seeing more are they that are for them than they that are against them…”
As you are tempted, and I am tempted to apply all my might, and resource and power to produce a fantastic season, let’s stop ourselves and realize God’s message. His word to Zerubbabel is the same to you and I.  Not by might, or by power, but by God’s Spirit, the grace of Christ will find our families and homes this Christmas.
Oh Lord let our actions be to the least of these, our songs sung not for production but in awe and wonder giving peace to far and near.  May our gifts given unto the least of these and exchanged between loved ones bring honor to Christ.  May our homes be ready to welcome, and extra room given this season for your Son, for our Christ.  Oh Lord tell us again the good news of great joy fill us with the wonder of Christmas.  Father let the peace of your Kingdom be reconciled where war has torn men apart.  Let the weary world rejoice, in the truth God is with us!
2 Timothy 4:22 The Lord Jesus Christ be with your spirit. Grace be with you. Amen.
Love all and above all love God, Charity

wedding weekend! 6.11 the day before it rained, so tough but their wedding day was perfect. Congratulations Mr. and Mrs Duncan 💒
2022 Prom:)) thx @innatepictures for these ♥️🦢🤍☝️
the upward call to care, Jesus said it to Peter and he says it to us as well…’if you love me, feed my sheep’

Good morning Awake! We want to pray for you, that you will have community today🤍
Morning word from @charityrattray
%d bloggers like this: